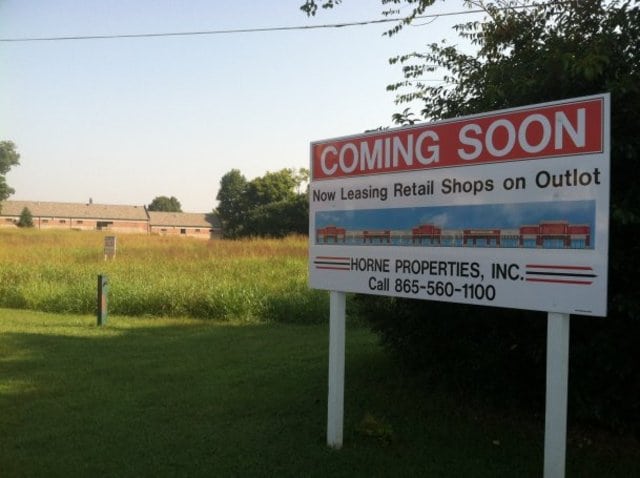 An undeveloped property at a prominent site in West Knoxville has changed hands for more than $8 million.

An entity linked to Horne Properties recently paid $8.5 million for a 24-acre site at the northeast corner of the Kingston Pike-Cedar Bluff Road intersection.

Michael Patterson, Horne’s director of development, said the company has out-parcel deals with restaurants including Zaxby’s, Bojangles’ and Carolina Ale House, a sports-themed concept that is based in Raleigh, N.C.

Patterson said the company is planning a retail development in the rear of the property and is in negotiations with a grocery concept that is similar to Whole Foods, and isn’t currently in the Knoxville market.

“(We’ve) had just a ton of demand for our small shop space there. … I think it’s going to be a really nice development,” he said.

The Cedar Bluff corridor has been a hot spot for retail development in recent years.

A new shopping area that includes discount grocer Aldi and sporting goods chain Academy Sports opened on the south side of Kingston Pike.

In addition, a Kroger Marketplace store opened last year on a site located directly across Cedar Bluff from the tract purchased by Horne.

More recently, Pigeon Forge-based SmartBank announced plans for a new branch at the corner of Cedar Bluff and Peters Road.

That office is now under construction, and the plans call for a location of fast-casual Mexican eatery Chipotle to be developed adjacent to the bank.

The acquisition by Horne Properties wasn’t a huge surprise, since the company had already posted a sign on the site.

The seller on the deal was First Presbyterian Church, in downtown Knoxville.

The property was once owned by a 105-year-old widow named Kaptola McMurry, who died in 2005 and bequeathed nearly 47 acres at the site — including the tract sold to Kroger — to the church.

Patterson said Knoxville-based Horne Properties is in the final stages of getting a grading permit from the city, and is hoping to begin grading in a week or two.

The company is also planning to install a new traffic signal at the Kingston Pike entrance to the site, across from Cedar Springs Presbyterian Church.