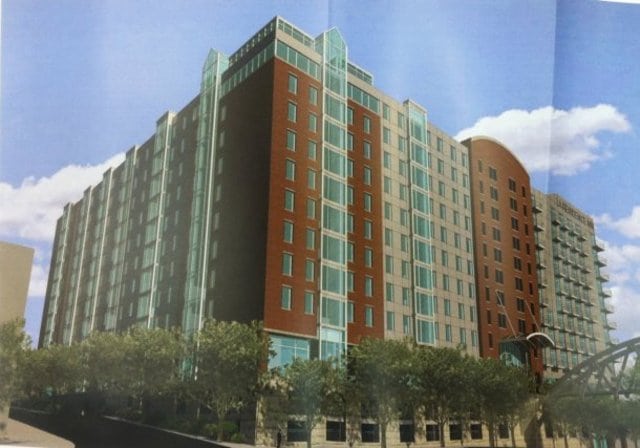 The city of Knoxville is negotiating with Gateway Knoxville LLC to develop the former Supreme Court site into a hotel, condominiums and restaurants. | Image courtesy of Knoxville News Sentinel

Much has been made recently about the booming hotel development market in Knoxville, and new data from a Middle Tennessee research organization help shed some light on its origins.

STR is a Hendersonville-based company that has deep ties to the hospitality industry and produces detailed reports about markets across the country.

The company’s trend report for Knoxville shows a couple of noteworthy data points.

Equally important, all those heads in beds are matched by an expanding revenue stream.

Slice and dice the numbers in a slightly different way, and a similar pattern emerges. The STR data show that revenue per available room jumped from $43.66 in 2009 to $53.19 in 2013 — an increase of nearly 22 percent.

Whether it’s a boom in tourism or increasing strength in the local economy or some combination of the two, demand for Knoxville hotel rooms is clearly on the rise, and that means revenues for local hoteliers are taking a similar turn.

Tease out the trends a little further, and an obvious twist comes next — more hoteliers looking to carve out a bigger piece of the lodging pie.

That’s certainly been the case in Knoxville.

A $21 million Embassy Suites opened earlier this year on Parkside Drive, while a new Courtyard by Marriott is slated to open in October between Northshore Drive and Weisgarber Road and a new Hilton Garden Inn near the Cumberland Avenue Strip will open soon (if it hasn’t already).

On the downtown front, meanwhile, developer Nick Cazana recently bought an eight-story office building at 531 Henley St. for $550,000, with plans to convert it into a 120-room hotel called The Tennessean, and an Atlanta developer is planning a 120-room Residence Inn by Marriott on the old News Sentinel site.

Even a pair of hugely ambitious projects — a new development on the South Waterfront and the leading proposal for the old Supreme Court site — include hotel plays.

There’s no guarantee that all those projects will get built, but even if only a portion come to fruition, they’ll put additional pressure on existing hotels.

The interest proves one thing, though. At some point, Knoxville’s hospitality numbers took a positive turn — and developers were listening.