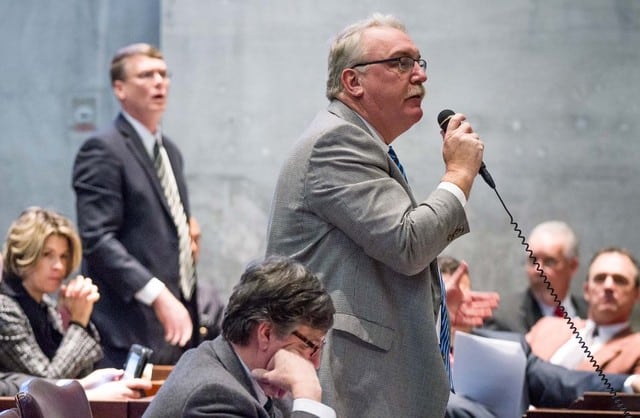 NASHVILLE — A leading Democratic legislator says either fraud or incompetence was involved in awarding millions of dollars worth of tax credits for development of two low-income housing projects in East Tennessee — one to a company where a top aide to Gov. Bill Haslam once worked.

House Democratic Caucus Chairman Mike Turner outlined concerns about the projects in Anderson and Sullivan counties at a hearing on Tennessee Housing Development Agency last week and urged colleagues on a joint House-Senate panel to delay giving THDA a new lease on life pending a full investigation of “potentially illegal activities going on.”

“We have a system that encourages people, if not to cheat, to at least push the envelope to the very edge,” said Turner.

Republican members of the Government Operations Joint Subcommittee unanimously voted down the request, though Sen. Mike Bell, R-Riceville, and Rep. John Ragan, R-Oak Ridge, pledged to hold a hearing on the issue if Turner’s concerns are not resolved by his planned followup meetings with THDA officials.

“I don’t believe anything illegal is going on with the low-income tax credit program,” THDA Executive Director Ralph Perrey told the legislators, though he acknowledged developers strive to manipulate the complicated system to their advantage in an “intensely competitive” effort to win limited tax credits each year. There are sometimes “judgment calls” made that are subject to dispute, he said.

Perrey said he believes complaints coming to Turner are the result of developers who “have an ax to grind” because they failed to get credits for their projects.

The federal government allocated $14.3 million worth of tax credits for low-income housing projects in 2013 and 119 companies filed applications for them, according to Perrey. THDA decides which applicants receive them on the basis of a Qualified Application Plan (QAP) submitted by each. Only 23 were selected to receive the credits.

The way the system works, as explained by Perrey, the credits on federal taxes are almost the equivalent of cash. A company receiving the credits typically sells them — perhaps for around 85 cents on the dollar — – and uses the resulting money toward project costs, substantially cutting the amount of money that is borrowed and thus allowing the company to turn a profit with lower rent payments by those who ultimately reside in the projects.

The two projects cited by Turner:

n Anderson Hall Apartments, located in Clinton with Alabama-based Hall Housing Investments, headed by Gary Hall, as the developer, according to THDA documents. The 72-unit project, costing an estimated $9.5 million, was given 10 years of tax credits at $660,797 per year.

n Mountain View Apartments II in Bristol with Knoxville-based Lawler Wood Housing Partners, LLC as the developer, according to THDA documents. The 94-unit project, involving $3.5 million in renovations and a $3.1 million purchase from the prior owner, received $656,005 in annual tax credits for 10 years.

Mark Cate, chief of staff to Gov. Bill Haslam, was a vice president of Lawler Wood before leaving to serve as manager of Haslam’s 2010 campaign. He now serves as the governor’s representative on the THDA board.

Through a spokesman, Cate said his work with Lawler Wood was in a separate division that has no involvement with housing projects and that he has no investment interest in the company. He was also absent at the THDA board meeting where the project was approved, according to David Smith, press secretary to the governor.

In both cases, Turner questioned claims made by the companies on their QAP. Applicants must list amenities that will be available to project residents on the QAP and are awarded points for them. The point total then becomes the focal point in deciding which companies get the credits.

Anderson Hall received a perfect score of 297, THDA documents show. A competing proposed development in Anderson County, Spencer Crossing, got a 290. John Rankin, who owns the property that would be used by Spencer Crossing, said in an email provided by Turner that he was “shocked” at the score awarded to Anderson Hall’s application.

The Anderson Hall QAP states that a “community center,” a public library, a public park and post office are located nearby — accounting for nine of the 297 points the project received in its rating by THDA. Actually, Turner told the committee, all those are private facilities that would not be open to the public and residents of the project.

The referenced post office is a private company’s mail distribution center, he said. The company’s QAP lists the Museum of Appalachia as the community center, though critics say it doesn’t meet the definition for that term.

The Langston Hughes Library, operated by the nonprofit Children’s Defense Fund, is listed as the library. A website describes it as “a private, non-circulating, 5,000-volume reference collection and reading room” maintained by the Defense Fund on the Haley farm.

The NAGF Recreational Association is listed as the park. Turner produced a picture of the entrance showing a locked gate and a sign declaring it private property.

“I think that was fraud,” Turner said at the hearing. “If it is fraud, if this guy did falsify documents, there should be some kind of penalty there.”

“I’m not sure that is classified as fraud,” Perrey said at the hearing. “It’s a judgment call…There (are) sufficient categories of grayness.”

The Lawler Wood project’s QAP lists the Avoca Branch Library in Bristol as both a library and a community center. THDA staff agreed that it qualified as a library, but said it did not meet criteria for a community center, documents show. The staff decision, however, was overridden by the THDA board of directors’ Tax Credit Committee when Lawler Wood appealed to the five-member panel and the project got points for both.

The committee is the ultimate decider of such disputes, Perrey said, and there is no means for challenging its decision within the THDA process. The only possible penalty if fraud is established, he said, is a restriction on applying for projects in the future.

In an interview, Perrey said the system is set up so that it is effectively impossible for a THDA board member to assure approval of a given project. The projects compete against one another statewide, he said, not just against those nearby.

The QAP amenities definitions, he said, are intended to be as objective as possible but are subject to interpretation and “reasonable people can disagree.” New standards are being developed, he said, with the goal of making them simpler “with less wiggle room for creative interpretation.”

He declined to “parse out” the questioned projects cited by Turner, citing the possibility of court litigation.

Turner said he met after the legislative hearing with staff of U.S. Rep. Jim Cooper, D-Nashville, for help in deciding whether THDA’s handling of the projects could jeopardize federal funding for Tennessee low-income projects in the future. He and Perrey said they plan to meet for further discussions.

Like all state agencies, THDA’s existence must periodically be renewed by the Legislature. Last week, the Government Operations Subcommittee voted to give THDA another four years of life over Turner’s objections that the panel should first hold a full-blown hearing on award of tax credits.

The panel’s next scheduled meeting is Nov. 12. Perrey said that THDA will be selling several million dollars worth of bonds in October and a delay could impact the bond market view of the agency. Perrey said he would much prefer the agency have a vote for extended existence rather than a delay “on the eve of our next bond sale.”

Bell told Turner that “I share your concerns” when making a motion for extending THDA’s life with the understanding that there would be a full hearing later if “the allegations are not answered to Rep. Turner’s satisfaction.”

Ragan, who presided at last week’s meeting, also pledged to support a full hearing of developments warrant. He also said that, if there were serious problems, the state comptroller’s office would likely have detected them in a regular audit.